This error message can  frequently appear for users after the mailbox migration from Exchange 2010 to 2013 or 2016 .

The actual cache is that this error will be coming up only for few users and it appears to be perfectly fine for rest of the users.The thing is that the Outlook will appear to be working fine , users will be able to send/receive emails except for this annoying message keeps prompting the users very often.

The delegated account is not fully established the connection to the new Mailbox Databases after the migration due to some reason and the users delegated mailbox table did not receive the delegate permissions accounts information. We can further look  a deep analysis on the mailbox tables on the affected user by using MFCMAPI  and looking into ACL tables but then that will consume a lot of time.

Mostly the below two solutions will  fix this issue:

But still not sure what is causing this issue
Also there is one more possibility which might cause this issue
The msExchHomePublicMDB attribute on Exchange 2016 databases should not have the legacy public folder object(Exchange 2010).

If we find this value in Exchange 2016 databases we can go ahead and remove them ,Since there are no more OAB end points  that depends on PF’s and no more Outlook clients that require PF’s in Exchange 2013,2016 Environment.

Inorder to remove them perform the below:

Open ADSIEDIT.MSC – Configuration Container – Navigate to Configuration Container – Expand Services – Microsoft Exchange – Domain – Administrative Group – Exchange Admininstrative Group – Databases – Right click on the databases seen on the righ pane and choose properties – Look for msExchHomePublicMDB and if it has any values clear them. Make sure to clear this values for all the other databases we have. 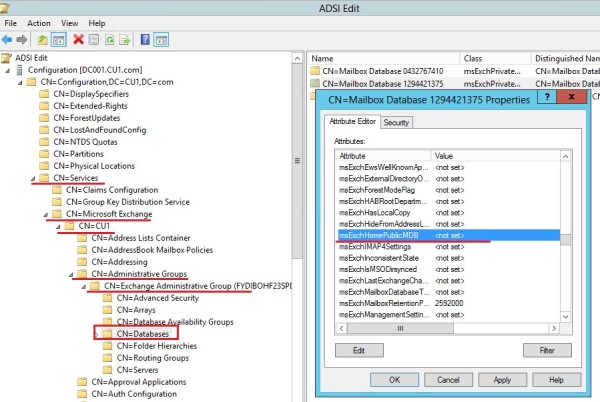 This above troubleshooting is applicable only for users migrated from Exchange 2007/2010 to 2013/2016 and not for the below  scenarios in any cases.

This site uses Akismet to reduce spam. Learn how your comment data is processed.